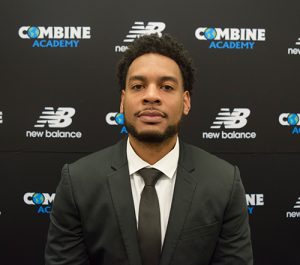 Denzel Dillingham joined Combine Academy as Men’s Basketball Assistant Coach in August 2019. Dillingham brings a tremendous understanding of the game and ability to connect with student-athletes to the academy. Dillingham specializes in player development and has a passion for helping student-athletes succeed on and off the court. Dillingham had an outstanding career as a college basketball player at the Division II level. He started his collegiate career at Lenoir-Rhyne University in Hickory, NC, where he was named 1st Team All-SAC during the 2012-2013 season. After spending two years at Lenoir-Rhyne, Dillingham transferred to Paine College in Augusta, GA, for his final two years of college. At Paine, Dillingham continued his success and earned numerous accolades in 2015, including being named 1st Team All-SIAC, SIAC Newcomer of the Year, SIAC Player of the Year, and being selected to the NABC All-District South 2nd Team. Contact Denzel Dillingham at: [email protected] or at 704-909-0540.