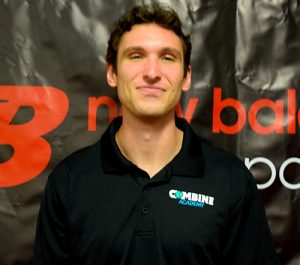 Chris’ first taste of Combine was as a teenager in high school. While working out in a local gymnasium, Chris was approached by Jonah Baize, later to become President of Combine, to polish his basketball skills with higher level athletes. Throughout his first two summers training under Jonah, Chris developed a passion for outworking opponents and grew an understanding of how valuable personal sacrifice can be. As one of Jonah’s first high school trainees, Chris saw Combine grow from an idea, from there to a competitive program, and eventually to a nationally renowned academy for the youth.  After forming a strong admiration for Combine, Chris continued his personal journey in pursuit of an understanding for business. He attended the University of South Carolina for 4 years and obtained a bachelor’s degree in Economics. During his time in college, Chris took an unconventional route for a student and focused more of his time on developing his entrepreneurial aspirations with various endeavors.  Using his entrepreneurial experience as a driving force, Chris rejoined Combine as an administrative executive, focusing on business development for Combine in multiple facets. Contact Chris Chaney at: CChaney@CombineAcademy.com or at 704-909-0540.