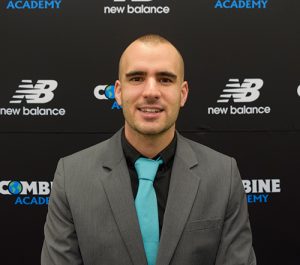 Nate Pausa graduated from Arcadia University in 2016 with a degree in sport psychology. Originally from Trieste, Italy, Nate played competitively until age 19, with his highest team achievement was reaching the National finals multiple times. Nate also spent one year in Williamsville, Illinois, as an exchange student, where he got a chance to be an assistant coach with both the men's soccer and basketball teams. This experience gave him motivation to come back to the United States to further his academic career, which brought him to Arcadia University. During his college days Nate worked with the Richmond Knights in London, England; he was a coach at Eurocamp in Italy; and was a member of the coaching staff at Arcadia University, under the tutelage of current St. Joseph’s assistant, Coach Justin Scott. Nate has completed four years here at Combine Academy, where he has served as a Head Coach and mastered the Head Video Coordinator position for the GOATs. Nate has trained over 250 players in his four years here, spanning from the NBA and Euroleague summer trainees, to collegiate prospects of all levels. In his time working with the AAU, High School, and Postgrad players, Nate has contributed to getting over 150 athletes to a collegiate or professional level. Contact nate Pausa at: [email protected] or at 704-909-0540.